There’s a common saying: To live your truth. It means living your life in a way that reflects genuinely who you are. Where you come from. What you believe. Honestly reflecting your hopes and your fears. It means getting past the facades we erect to advance in a world that is not by our own design. It means getting past the defense mechanisms that shield the world from our true selves, and shield us from its ceaseless disapproval. It also implies a need for empathy to others as they live their own truths, each being different than our own.

In this historical moment, America must live our collective truths if we are to come together as a nation. We’ve had a close presidential election, but one that was ultimately decisive in moving us onward. We’re in the middle of a pandemic that stubbornly refuses to bend to anyone’s will. And we’re reckoning with, or awakening to, the profound undercurrent of racial tensions and injustice that are centuries in the making.

I grew up in the small town of Wanamaker, Indiana. In eighth grade I served as one of our township’s ambassadors for our “Northern community” students who were bused to our remote school as part of Indianapolis’ desegregation. I felt badly that kids my age would be forced to leave their own community to travel on an hour-long bus ride every morning, but I was all smiles as I eagerly awaited their arrival as part of our all-white welcome committee.

Fast forward 40 years. I now live in Portland, Oregon, an epicenter of the Black Lives Matter protests. Black lives do matter, and whatever I might feel about Portland’s situation and what has happened to our city these past few months, the acuity of the topic has caused me to think more deeply about my past, and our collective past. I wanted to do something to mark this moment and “live my truth” as the cliche goes, but using America’s truth as the backdrop.

I reached out to a Portland artist, Pippa Arand, who had done some wonderful pencil and ink paintings of historic figures. Her John Lewis and RBG works inspired me to commission a piece integrating three stories of the Presidency, and specifically their impact on race relations. I focused on the presidents because of their unique role in galvanizing the spirit of the nation, and I was no doubt influenced by the weight of the current election.

To me, Thomas Jefferson, Abraham Lincoln and Barack Obama weave a complex but important throughline on race relations in our country. You can see here that Pippa captured the three in pencil and beautiful inks from Korea. The story told here is one of contrast and irony, but also of shared hope for a more perfect union. 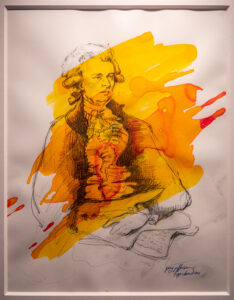 The young Jefferson, captured here in his early 30’s when he penned the Declaration of Independence, created our framework for living as free people, despite owning slaves. Jefferson’s ownership of slaves was mired in a complex web of inheritance, economics and politics. He wrote the first state law banning the Atlantic slave trade, and as President he outlawed it for the entire nation, although he didn’t outlaw the ownership of slaves. He believed that slavery corrupted both master and slave, but he also feared what would happen if slaves were all freed, something called manumission.  He wrote “We have the wolf by the ear, and we can neither hold him, nor safely let him go. Justice is in one scale, and self-preservation in the other.” He feared that slaves wouldn’t be able to live peacefully alongside their former masters, for obvious reasons. He also feared a civil war if the federal government forced emancipation on the states. It’s tough to put ourselves in that place and time, but the federal government was a new idea and Jefferson felt strongly it should have only limited power over the states. But the civil war he feared would be inevitable. Which brings us to the second painting of Abraham Lincoln. 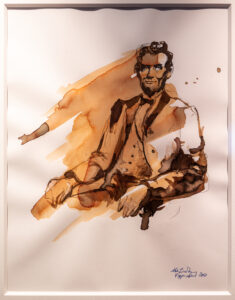 You might think that Lincoln always sought the immediate release of slaves. But in fact he had the exact same concerns as Jefferson. Jefferson thought maybe it best to send former slaves to Santo Domingo to avoid the inevitable clashes between them and their former masters, but Lincoln thought Africa would be best. Lincoln didn’t initially see former slaves as an intrinsic part of American society, but rather as an alien group that had been uprooted from their homes, and he felt it best to return them there. But eventually he rejected those views and pushed for full manumission. He knew there was no easy way around it. Slavery had to be ended, and the union advancement on the south and the dwindling of slavery already underway made it possible. For anyone who has seen the movie Lincoln, you know the historic struggle and leadership that culminated in the 13th Amendment. History’s verdict is that Lincoln was the right man at the right time. 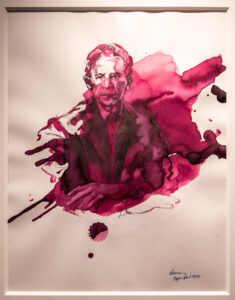 That brings us to the subject of the third painting. After more than a century and a half of bloodshed and impossibly difficult struggles for equality since Lincoln, we don’t have the benefit of time to give us perspective on Barack Obama. Was he a success on racial equity?

He is certainly unlike any other politician in my lifetime. A scholar and a statesman, he embodied our collective hopes on racial equality like none before him. There are those who say he was just as bad as every other President when it comes to equity, but I disagree. He made important strides on immigration and criminal justice reform, on the importance of inclusion, and I’d point to the Affordable Care Act as further evidence of his impact. Obamacare disproportionately benefited black Americans to provide equal access to affordable health care, and it would have resulted in even greater benefit had so many states not refused to expand their own health programs.

But there’s something else, something less tangible. I was there on that crisp morning of Obama’s first inauguration, January 20th, 2009. I saw what it meant to the sisters who had driven up from Miami and stood in line next to me waiting to enter the ceremony. I saw what it meant for them to see someone who looked like them be chosen by the people to represent all of us at the highest level of power.

How do you measure inspiration? How do you measure the weight of expectation and the wall of cynicism confronted by a person who is first to do something? How could we ever measure Obama’s effect on our trajectory, and on the trajectory of black children in particular?

That cold January morning was telling for another reason, and this is where my personal truth comes in. The crowd control that morning was non-existent. Even though the Miami sisters and I entered our tidy single-file line at around 5am with our embossed purple tickets gripped tightly in hand, we never made it in. The line was an amorphous blob by 8am, and only those that ignored the line and swamped the gate entered. I couldn’t accept that. This was a ceremony that would mark our turning point. Our nation, united, could finally recognize our common humanity and address our common challenges. We could finally look past the struggles of the past. I wouldn’t, I couldn’t miss that ceremony.

I was gripped by disbelief and then grief over what happened that morning. To be honest, I still have a hard time with it. But the sisters from Miami? They said simply, “Oh well, we’ll just go watch it from our tv at the hotel,” and we wished each other well. As I stood there, watching each of my own disgruntled and steamy breaths, I was confused by how they could give up so easily.

I think I now have a better understanding of it. They were there to celebrate a first, as we all were. They were there to celebrate the potential for progress. But unlike me, a smug white Obama voter, they were under no illusion about it being a true turning point. “Oh well,” they said. They knew from their life experiences something I did not: Barack Obama’s victory was not a victory on race relations or justice. That ceremony was not a battle won. It was more like the Declaration of Independence, or the 13th Amendment, representing an idea. It was an inspiration for the potential to do the hard work necessary to form a more perfect union. And while I would argue that morning and his inspiration were essential steps in our journey, it was still just inspiration. It was still just a ceremony.

Pippa depicted Obama here slightly older. Perhaps at this age we’ll have the perspective of time to know if my assessment that he served as a historic inspiration holds up. Perhaps at this age those ideals of a more perfect union will be realized. Senator Harris enters as the first black woman elected on a presidential ticket. Will she inspire us to reckon the past and move forward? Will she be my fourth painting? Only time will tell.

I find it fascinating Pippa started with pencil for Jefferson and Obama, and the color came after. As if they were the artists who made their own color. But with Lincoln she started with the ink, as if he was dealt the darkness and rose as a hero from it. Taken together, I believe these three weave important threads in our racial fabric. Their complexities and ironies require that we accept that multiple, sometimes conflicting things can be simultaneously true. You can’t brush any of them, or any of us, with a single brush stroke. To do so would undermine our reality, our own unique truths. But taken together we paint a colorful, collective truth that America is now living. And just as on that cold January day, I am filled with hope.

That’s my story, at least so far. I am looking forward to continuing to grow and continuing to participate. Who knows, but through our ongoing conversation maybe it’s us that will be in that fourth painting.