My theory of persistence proposes that gravity and particle behavior are caused by the same phenomenon: Particles exist as pathways or “threads” spanning from their origin to their termination, and all particles that have ever or will ever exist in all of time are interwoven into a timeless, i.e. “persistent” fabric.

Persistence asserts that gravity is caused by a differential pressure created by this timeless 3 dimensional particle Fabric wrapping more densely around matter including planets and galaxies and less densely between them.

As a case in point, if you draw particle threads around a planet and its moon, it creates a bipolar shadow with a comparative lack of Fabric density between them as well as on the opposite sides. This is observable in the diurnal pattern of our tides. 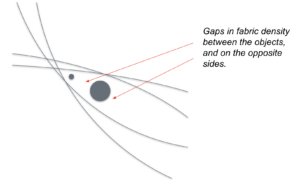 What about Dark Matter?

Persistence proposes that the amount of gravitation currently attributed to dark matter may actually be due to this differential pressure, or what I call the “Fabric gravitational effect” caused by matter that travels through that area of space at other times (by “area of space” I mean the Newtonian idea of absolute space where the Cosmic Microwave Background serves as a backdrop). Put another way, when you combine observable mass with all the mass of all particles that have ever or will ever traverse through a particular area of space, you may account for all the gravitation we observe.

What About The Quantum?

Persistence proposes that particle behavior currently attributed to superposition may in fact be due to the influence of Persistent particle threads on one-another across time. I.e. the interference seen in Young’s double slit experiment may be due to interference from particles from other times rather than particles interfering with themselves.

What Other Implications Are There?

Persistence may provide alternative explanations for other phenomena as well.

Might the Big Bang, for example, have generated so much Fabric “pressure” due to the density of the particle threads that it caused the expansion of the universe that we observe?

Might black holes be due to the confluence of particle threads passing orthogonally through the center of galaxies as others pass around their edges, creating a vortex effect that results in the galaxy’s spin and the immense gravitation of the black hole?

Quantum Entanglement seems to illustrate Persistence perfectly… the entanglement of particle threads in the Fabric.

Consistent with quantum mechanics, any attempt at measuring the Fabric will detect any given particle at a particular position, and be the termination of that particle’s path, or “thread.”

Fermat’s Principle holds that particles take the path of minimum or maximum time between two points. Persistence is consistent with this principle, suggesting that particles meander their way to the edges of the expanding universe, thereby following a best fit path that takes the greatest amount of time, or for those that are less adventurous terminate themselves at their destination in the least amount of time.

The Fabric is proposed as one and the same as spacetime described by Einstein in his general theory of relativity.

If true, Persistence could dispel other theories including Dark Matter, Dark Energy, String Theory, Supersymmetry and The Multiverse.

My journey started by reading Tim Folger’s article Shadow Play, published in the September 2001 issue of Discover Magazine. I picked up this magazine article at O’Hare airport during a layover on a redeye flight from Portland to Philadelphia on the morning of September 11th, 2001. By the time I landed in Philadelphia, which was after the first plane hit the twin towers but before the second, the article got me thinking about the strange behavior of particles, and the even stranger explanations given for that behavior by quantum physicists. This is where my earliest ideas about Persistence began. In short, it changed my life on the same morning, pretty much at the same exact time that our nation and our world was transformed by the terrorist attacks.

In 2010 I read Ted Chiang’s short story, Story of Your Life, which would become the basis for the movie Arrival. It taught me about something I’d never heard before: Fermat’s Principle. This changed my life again. I had the great fortune of meeting Ted Chiang at the Futurescapes writing workshop in 2019.

Learning of Fermat’s Principle helped solidify my confidence that Persistence was on the right track. I recently wrote about the Principle in a short story:

“It always fascinated me,” I said. “Each photon has to know the precise angle to leave the sun so it hits the water just right to minimize its total time, because light travels more slowly in water. And the only way for it to know is to know its entire path—”

“In advance!” he said enthusiastically. “Isn’t that the most remarkable thing? Particles like photons can’t just make it up as they go. They have to know their entire journey from their very beginning to their very end.”

It was at that moment that I realized without a lab, without an academic or research position, without grant money, and without formal training in physics, my best route forward was to create a great story to surround Persistence and make it interesting to a broader audience. Over the past few years I have become more serious about writing, making a number of new friends and learning about the perplexing world of publishing along the way. Publish a short story first, I said. That will be easy, and a novel will be a fast follow, I said. Ha!

Sagan Franklin and Brian Medlock, characters in my short story One Man’s Persistence, put it like this:

I regained my composure. “You had this unified theory brewing in your head, but you did nothing about it. No experimentation? No scientific publications?”

“How would I have?” The defensive tone in his voice was unmistakable. “I had a theory but I wasn’t in the field of physics. I had never even taken trigonometry or calculus.”

And so that is where my journey on Persistence has led me. My hope is that readers will ask themselves not only if the story is interesting, but if it might actually be true.

If you have any feedback or ideas about Persistence, please don’t hesitate to reach out to me at phil@drphilmarshall.com

I look forward to staying in touch!